Polychlorinated biphenyls (PCBs): What are they?

What are PCBs & where are they found?

Polychlorinated biphenyls (PCBs) are man-made odorless substances in the form of a clear oil or a yellow or black waxy solid. There are a variety of PCBs created with different amounts and placements of chlorine molecules attached to carbon-hydrogen chains (1). The PCB formula determines how it is used in products or settings.

PCBs were created in the United States around the early 1930s for commercial use (1). Due to their high chemical stability, resistance to electricity, non-flammability, and tolerance to high temperatures, PCBs were appealing to companies that make electrical equipment for circuits such as capacitors and transformers, plasticizers in paint and rubber, and other industrial products. Around the late 1970s, PCBs were found to be toxic to the environment and humans, which resulted in their ban from production under the Toxic Substances Control Act in 1976.

PCBs are hard to break down, causing them to circulate in the air, water, and soil once they have been created and released into the environment. Like many other products used by humans, once PCB-containing products are done being used, they are often thrown away improperly and/or taken to hazardous waste sites or landfills not fit for toxic waste. This results in PCB absorption into soil and contamination of water from toxic waste runoffs which are consumed and absorbed by animals and plants that are ultimately consumed by humans (2). 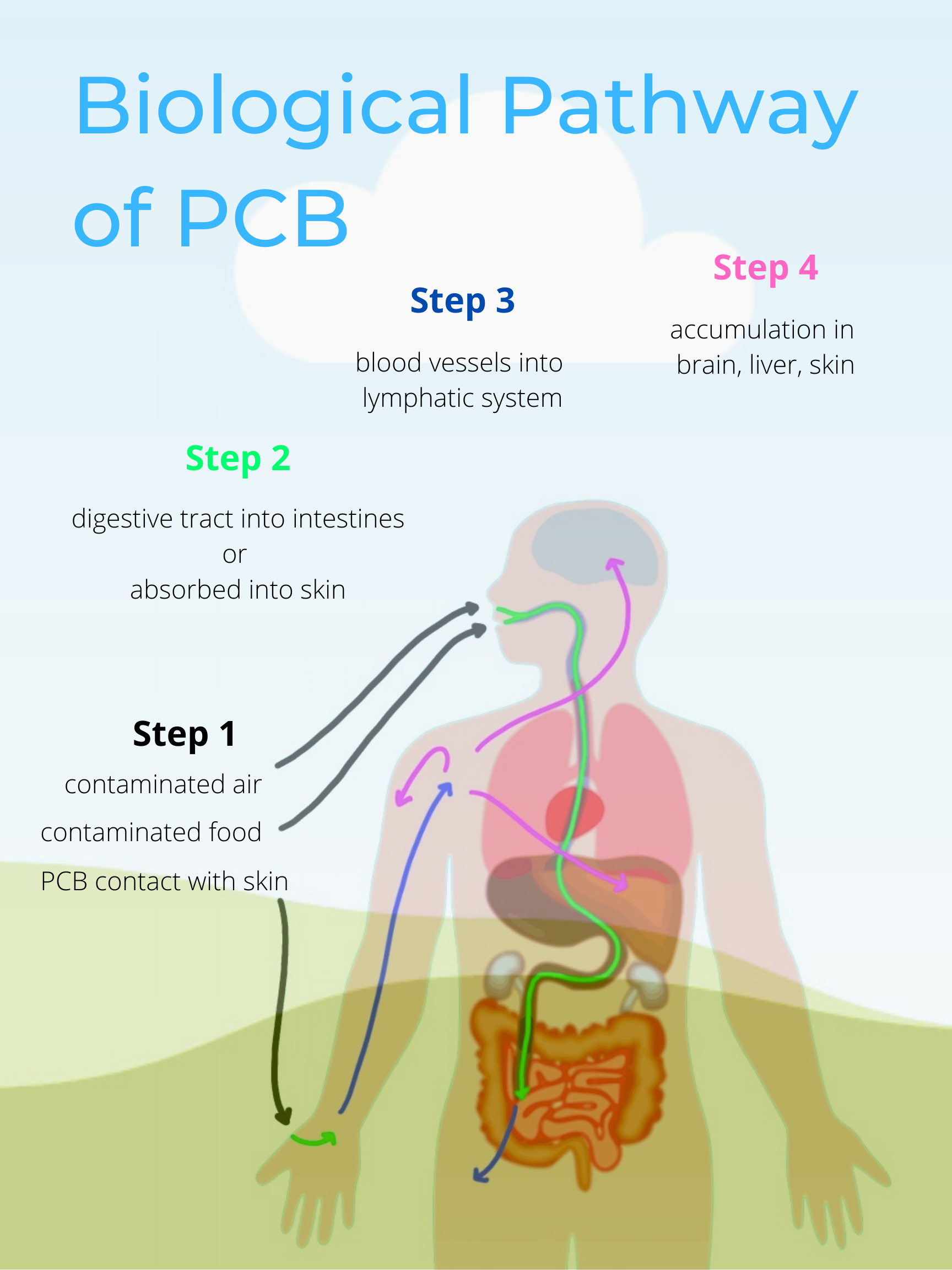 There are multiple ways that PCBs can get into our bodies: breathing PCB contaminated air, eating PCB contaminated food, and/or physically touching PCB. (3) Once it is ingested or touched, PCB is absorbed through our digestive tracts or through our skin. The PCB molecules then make their way into our blood vessels and lymphatic system, which is responsible for removing toxins from our bodies. Although the lymphatic system will be able to clear out smaller PCB molecules, bigger ones will accumulate in areas of the body that have more fat such as the brain, liver, and skin. In pregnant women, PCBs can affect the baby through the placenta, umbilical cord, and breast milk. (3) This results in greater risk for cancer, problems with the immune system, and neurological or developmental issues.

Effects of PCB on Development of Children

Children who come into contact with PCBs, prenatally or during the first few years of life, can experience several physical and mental health challenges. This may include lower body weight, stunted growth, lower IQ, and a higher probability of showing behavioral problems (4). PCB exposure may also lead to liver abnormalities and skin conditions such as chloracne, a breakout of cysts across the body (1).