What is air pollution and how does it impact my family’s health?

What exactly is air pollution?

Air pollution is inorganic material in the air released by things like trains, buildings, and traffic. Air pollution is sometimes referred to as particulate matter (PM) and can be classified into two sizes. “Large” PM is around the size of one spec of dust or pollen – about 10 micrometers. That is really small! But there are even smaller particles – around 2.5 micrometers (1). For reference, one grain of sand is about 90 micrometers. Smaller particles can more easily enter our bodies, so the smaller PM is actually much more dangerous and does the most damage to our bodies. Research on traffic-related air pollution has shown that PM also includes tiny bits of metal such as lead, copper, aluminum, and manganese (7).

What Exactly Does It Do To Our Bodies?

Air pollution causes inflammation and oxidative stress in our respiratory and central nervous systems. Oxidative stress is the body’s inability to get rid of molecules in our body that cause inflammation and damage. Exposure to PM through air pollution can lead to disorganization (3) and decreased volume of neurons in the brain (2). Also, the inflammatory response in the brain can cause glial cells to be activated and disrupt normal brain cell function. Glial cells are responsible for cleaning up debris (trash) and other unneeded things in the brain (3).

How Does That Even Work?

PM enters the body through inhalation (your nose!) and gets to the brain through the bloodstream or travels directly through the olfactory nerve in your nose (2). Although there is no confirmed mechanism for how exposure to PM causes behavioral and cognitive impairments, there are a few suspected pathways. One possibility is that PM decreases the number of glutamate receptors. Glutamate is one of the most common chemicals in the brain and is responsible for many things such as learning and memory.  Fewer glutamate receptors may impact the brain’s ability to support things like learning and memory (4). Researchers have also proposed a pathway involving a protein called reelin. Exposure to traffic-related PM, specifically diesel exhaust, can lead to a decrease in reelin which is responsible for brain organization in the early stages of human life (3).

Exposure to air pollution in the third trimester of pregnancy and the early stages of childhood can increase the risk for cognitive and behavioral challenges that could affect an individual across their lifetime (3). Exposure to air pollution is associated with slower brain maturation and greater segregation of major brain networks. It also has been associated with lower IQ and overall academic outcomes (2). Children exposed to air pollution in early developmental stages may also show behaviors typical of conditions like Attention Deficit Hyperactivity Disorder and Autism Spectrum Disorder: repetitive behaviors and social impairments like decreased verbal abilities (6). However, exposure to air pollution can impact people of all ages. For example, one study of retirement age people found that adults living in metropolitan areas (where pollution exposure is generally greater) had worse long-term memory than older adults living in non-metropolitan areas (1). 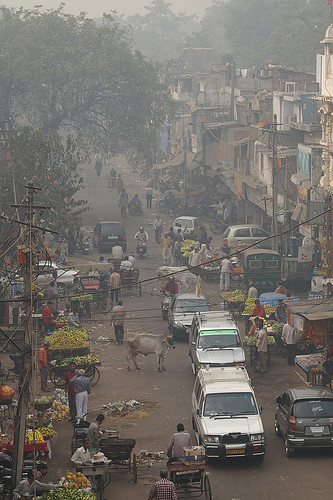 How Does This Affect Those Around Me?

It is very important to look at neighborhood trends when considering who is affected by air pollution. Exposure to air pollution is unfortunately correlated with socioeconomic resources. Air pollution estimates are typically much lower in high-income and majority White neighborhoods, calling attention to environmental inequities and environmental racism.  Inner-city neighborhoods are disproportionately affected by exposure to PM because, historically, these neighborhoods are situated closer to roadways or other locations where these harmful emissions are emitted (5).

What is being done about this?

Because Maryland is so densely populated and is close to major cities like Baltimore and DC, air pollution is a concern for families and individuals in the DC Metro Region. Traffic emissions are a very large contributor to the emissions, but are not the only player. Emissions from coal-burning plants and similar establishments also contribute to PM build-up and greenhouse gasses. This not only negatively impacts the people living here but also important wildlife areas such as the Chesapeake bay (8). The Maryland Healthy Air Act has been enacted to help reduce PM release and exposure. This act puts great restrictions on power plants to reduce emissions into the air, water, and the Chesapeake Bay (9). Other proposals are in the works to decrease the amount of traffic-related air pollution in the state and specifically in communities that are disproportionately impacted by air pollution. These plans focus on the electrification of public transportation and also working with auto companies to make their vehicles more efficient and eco-friendly (8).

Undergraduate Research Assistant at the University of Maryland, Class of 2022